Hyphens and Dashes: Clearing Up the Confusion

What’s the difference between a hyphen and a dash? Did you even know there was a difference? Lots of people use them interchangeably, but if you want to present a perfect document and stand out from the crowd, you need to understand the difference.

Do You Remember Typewriters, Pens and Paper?

It’s not surprising that hyphens and dashes get confused. They look very similar! In handwritten documents they’re virtually indistinguishable. However, there are clear and important differences in the ways that they’re used.

One of the biggest practical problems for anyone getting to grips with hyphens and dashes is that standard keyboards only have hyphens. In the days of typewriters (if you’re under 30, you may have seen one in a museum), typists would use two hyphens to represent a dash. Today there are handy shortcuts: on a PC, press the “minus” key on the numeric keypad to produce a hyphen, press the same key with CTRL to insert an en dash and with CTRL+ALT to add an em dash. Even easier, MS Word will usually change hyphens into dashes where appropriate as you type (and for former typewriter users, it even converts two hyphens to a dash). However, beware of the false sense of security that modern technology can give! MS Word will occasionally miss hyphens that should be converted, especially in ranges or if you go back and edit what you’ve written. The best thing is to understand the difference and enter them yourself.

A hyphen (-) is used to join words together to show that they have a combined meaning. This can be a compound noun (e.g. ‘glow-worm’, ‘pick-me-up’, or ‘policy-maker’) or where a prefix is used (e.g. ‘anti-aircraft’, ‘pre-ordained’). Hyphens are also found in compound adjectives that come before a noun (e.g. ‘a well-known actor’). Hyphens are also used to indicate where a long word has been broken in two at the end of a line.

Dashes (– or —) have a few uses. The first is to separate parts of a sentence where they can be used to create a pause or to lead on to the next clause. Dashes can also be used in pairs to separate a clause from the rest of the sentence (similar to how brackets are used). Another use of the dash (in this case only the en dash) is to join together two words that are of equal importance, as in the ‘retailer–customer relationship’ or the ‘London–Brighton railway’. Though remember, if the first word can’t stand alone and it is a prefix then you must use a hyphen (e.g. ‘the Sino-Japanese War’). An en dash can also stand for words such as ‘and’ or ‘to’; and it follows that a dash rather than a hyphen should be used in number or date ranges: 25–50, 1939–45. Other uses of the dash include where a sentence is abruptly broken off, especially in dialogue. 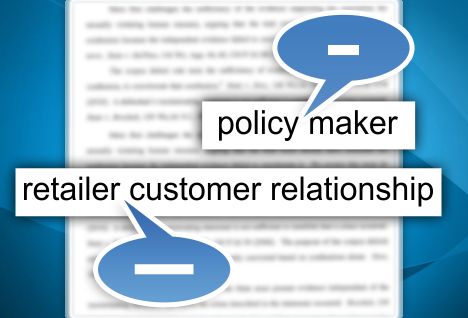 It’s not just knowing when to use a dash that matters. You may need to choose which dash to use. Many UK publishers use en dashes while those in the US often prefer em dashes. More often than not, American publishers will also set their em dashes without spaces between the preceding and following letters even when they’re used parenthetically. And it’s not strictly a transatlantic divide, as there are publishers, journals and websites on both sides of the Atlantic who have their own particular preferences (just as they do with things like quotation marks).

You may be asking why this matters: couldn’t we just use hyphens for all these uses? The answer is that the differences between the hyphen and the dash enable both the writer and the publisher to make subtle but important distinctions in both the sense and the appearance of their text, distinctions that remain important whether in a book or on a website. Showing that you know the difference and how to use them properly will help your document stand out from the crowd.

Five Things to Check In Your Document

A More Accurate Way to Check

If you’re under time pressure (or even if you’re not), spotting differences between hyphens and dashes can be extremely difficult. It usually involves writing down every choice you’ve made between hyphens and dashes, and then comparing that choice to your text in every single location that hyphens or dashes are used. It’s time-consuming, and it’s very easy to make a mistake. But we’re not stuck with typewriters, pens and paper anymore! So here’s a better way. You can use PerfectIt to quickly check hyphens and dashes both for consistency and for house style preferences.

PerfectIt is an MS Word add-in that runs over 30 checks on your document, including hyphens and dashes. Launch PerfectIt directly from MS Word, then, in seconds, it can compare every hyphenated word or phrase to every phrase with dashes. It shows any inconsistency so that you can make corrections with a few clicks of your mouse. You still need to understand the difference between hyphens and dashes yourself (it won’t do the thinking for you). However, PerfectIt makes it easy to make corrections.

PerfectIt also checks preferences. If you know that you want a word or phrase to always be hyphenated, PerfectIt can make sure it is. And PerfectIt can look out for errors such as hyphens surrounded by spaces. You can even use PerfectIt to set your preference for spaced or unspaced en or em dashes. In each case, you still make the choice. But potential errors become easy to locate.

PerfectIt comes with a free trial. So for the most accurate way to check hyphens and dashes in the least amount of time, download PerfectIt and make the best impression with your text. Click to get the free trial now.