Australian Government Style is the preferred style of writing for most commonwealth, state, territory and local government departments, as well as many universities and private sector organizations. PerfectIt™ for Word automates how to follow it right within Microsoft Word, with all of the rules built in (learn more)!

Two handy references for Australian Government Style are the Style Manual (Wiley, Sixth Edition) and the Macquarie Dictionary. These help with Australian spellings, terms and punctuation to ensure writers and editors produce attractive and engaging documents. 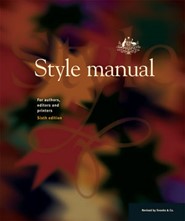 What to Look For

Whether for business or pleasure, writing needs be clear and uncluttered. It needs to be interesting. It should capture the audience’s attention and keep them reading! Your message is important and you want to deliver it without distracting the reader. So here are five things you should look out for when polishing your document to make sure it is in Australian Government Style.

Is the spelling ‘industrialise’ or ‘industrialize’? ‘Analyze’ or ‘analyse’? ‘Program’ or ‘programme’? We're exposed to different spellings of these words all the time. With just a few exceptions, Australian spellings are based on UK spellings rather than US ones. For example, Australian Government Style tends to use ‘ise’ rather than ‘ize’ in words such as ‘organise’ and ‘emphasise’, ‘our’ rather than ‘or’ in words such as ‘labour’ and ‘favour’, and ‘re’ rather than ‘er’ in words like ‘centre’ and ‘fibre’. Spell checkers won’t find all of these variations (since they are accepted in English), so if you suspect some errant spellings have crept into your document, you can use the find facility in Microsoft Word to search for letter combinations. For example, searching for words containing ‘iza’, ‘ize’, ‘izi’ and ‘yz’ should track down places where a ‘z’ might need to be replaced by an ‘s’.

Government documents are often riddled with abbreviations. Take, for example, the letters ‘SLR’. Sea level rise, single-lens reflex, or Sri Lankan rupee? Or something else? Don’t leave your audience guessing. Define the terms next to the first occurrence of each abbreviation and/or in a glossary. It’s worth reading through your whole document an extra time to look for undefined clumps of letters, or even unusual words your audience may not be familiar with, and then defining these in full. If your document is very long, it may be worth reiterating what abbreviations stand for the first time they appear in each chapter/section.

Should numbers in text be spelled out in full or written as numerals? Should fractions be hyphenated if written as words? There are various conventions for presenting numbers, measurements and dates. One common way of expressing numbers in text is to spell words out in full for numbers up to and including ten, then use numerals for higher numbers. Whatever you choose, it’s important to be consistent. Look through your document and check that numbers, dates, and measures are clear, understandable and consistently stated. Make sure any dates would be easily understood by Australian readers. For example, in the US dates are often written month/day/year (e.g. December 25 2015 or 12.25.2015) rather than day/month/year (e.g. 25 December 2015 or 25.12.2015). Check there’s no ambiguity.

Government documents are often written collaboratively, by people from different backgrounds and with different ideas about how compound words should be expressed. Is it ‘trade union’ or ‘trade-union’? ‘Over-populate’ or ‘overpopulate’? ‘Multiculturalism’ or ‘multi-culturalism’? You don’t want your readers to be distracted by different forms of the same words. If your organization has a style guide it may list preferred forms; if not, it’s worth making your own list of common spellings so you have something to refer to when puzzling over whether a word or phrase needs a hyphen or a space. However, keep in mind that some phrases occur with or without a hyphen, depending whether they’re being used as a noun or an adjective. For example, if we refer to ‘long-term plans’ the words ‘long-term’ are adjectival (they describe the noun, ‘plans’) whereas if we say ‘in the long term’ the words ‘long term’ comprise the noun. Thus you might see both hyphenated and non-hyphenated versions of the same word pairs in a document, depending on their context.

If you’re worried inconsistencies may have crept in, and your report has particular terms that are used frequently, you can try using the find facility in Microsoft Word to search for those terms. If, for example, your document is about the Asia-Pacific region (and your organization prefers a hyphen in the term ‘Asia-Pacific’), look for places where it has been written as ‘Asia Pacific’ and add the missing hyphens.

Australian Government style recommends avoiding reference to “someone's sex, sexuality or marital status except where it is the issue under discussion” (page 58, Style Manual). One quick way to check for unnecessary references to gender is to search for the word ‘man’. This will show places where, for example, words like ‘chairman’, ‘fireman’ or ‘policeman’ have been used, allowing you to alter them to more gender-neutral words like ‘chairperson’, ‘firefighter’ and ‘police officer’. The Style Manual contains good tips on how to reduce the use of gender-specific pronouns; it also provides guidance on appropriate ways to refer to people with disabilities and at different life stages. Similarly, many university websites contain guidelines on inclusive language.

Checking spelling variations, abbreviations, numbers, hyphenation and inclusivity is crucial. However, it is also very time-consuming. Imagine how much time you could save by using software that saves you from checking through your entire text so many times? PerfectIt is an MS Word add-in that checks all of these things in minutes. Not only is it faster, but it also improves accuracy by reducing the likelihood of human error (especially on long documents). Moreover, PerfectIt comes with a built-in style sheet for checking Australian Government Style. The style sheet was put together by specialist Australian consultancy Biotext, and makes use of guidance from the Style Manual and the Macquarie Dictionary, as well as Intelligent Editing’s own database of terms.

To use Australian Government Style in PerfectIt, simply select the style from PerfectIt’s group in the MS Office Ribbon. The software will automatically check for Australian spelling preferences, inconsistent hyphenation and capitalization, inappropriate language, and much more. PerfectIt is not a replacement for a human editor (all style decisions are left to the user). However, PerfectIt saves so much time in checking Australian Government Style that it quickly pays for itself.

If you work in a government department/agency, a university, or even a large company, there is a good chance that your organization’s house style is based on Australian Government Style but mixes in some local variations. If that’s the case, you can edit the style sheet in PerfectIt to match your needs. Perhaps your organization deals with geology, or law, or foreign aid. You can easily add commonly-used terms (and commonly-encountered mistakes) to the provided style sheet. That way everyone in your organization can check your house style automatically. For large organizations, Intelligent Editing offers a service to do the customization for you. However, it’s also easy to customize the style sheet yourself and then share it with colleagues so that all documents appear in the same style.

Try It For Free

Style matters. To communicate effectively with your readers, it’s important to check documents thoroughly. If writing for an Australian audience, look out for terms and spellings that might seem odd. It’s time-consuming, but it’s the only way to make the best impression on your readers. And importantly, you can cut down the amount of time it takes by using PerfectIt. It can automatically check for Australian Government Style, leaving you with more time to focus on the parts of your document that matter most: your words and their meaning. PerfectIt is free to try, so download it and try it on your documents now.