Why Editing Programs are Like Gardening: Looking Back at Two Years of Design Improvements

When the software on your computer runs an update, do you notice the difference? Software companies spend millions improving and updating their software. But can you actually tell?

Over the past two years, we've released around 20 updates to PerfectIt. These range from the mundane (improved regional coding) to the bizarre (compatibility with documents full of gobbledygook symbols). But the most interesting improvements are the ones that nobody notices: the improvements in accuracy.

There are lots of ways to measure the accuracy of editing software. But metrics can be almost as confusing as the update that doesn't appear to fix anything. To really understand how computers help with editing (and why improvements to accuracy are important), consider checkers to be the gardeners of the editing world. They look at a garden and aim to identify the weeds. The problem is that it's not always easy to know what is a weed and what isn't. And if it's difficult for human beings, it's that much harder for a machine that doesn't understand language.

When we say PerfectIt has improved accuracy, we mean the software is both:

Two years ago, PerfectIt was already a powerful tool. It was developed to find mistakes that are not picked up by spelling and grammar checkers and that are very difficult for even the most eagle-eyed copyeditor to find. For example, two years ago PerfectIt could already find capitalization inconsistencies. It could identify a phrase that appeared in capitals in one location, but lowercase elsewhere. Moreover, it avoided the problem of pulling out good plants with the weeds because it understood that a word at the start of a sentence is supposed to start with a capital, so all the inconsistencies it found excluded those locations. Likewise, it ignored capitals in titles. Other features that have been there since the start include:

Over the last two years, we've developed PerfectIt to deliver more and more accuracy. In part we do that through our own research. The same analysis that allowed us to investigate the Top 10 Undefined Abbreviations and the Top 10 Inconsistent Spellings, also helps us to increase accuracy. Another reason for the improvements has been incredible support from our users. Our customers include almost 100 members of the Society for Editors and Proofreaders as well as members of top professional bodies such as the Editorial Freelance Association and the Editors' Association of Canada. Editors around the globe have pointed out ways that PerfectIt's accuracy could be improved, and we've responded to those suggestions with updates that catch even more errors. Two examples illustrate how we've increased the accuracy.

Over the past two years we've made PerfectIt a lot faster. However, since it only takes the program a few seconds to analyse a document, most people don't notice this. However, they do notice new features.

Perhaps the most significant new feature we've added is the ability to build more than one set of style preferences into PerfectIt. So for users who work with more than one style guide, it's easy to move back and forth between them. In response to a number of requests, we also added a method to automatically change two spaces after a sentence to just one space. 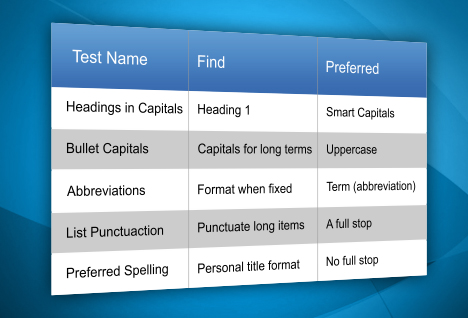 Other improvements have been made to our website. We prepared a demo video which helps explain the type of errors that PerfectIt finds. We introduced a forum so that users could share style sheets and discuss the program. And we produced a tutorial video to help people take advantage of all the customization options that our software allows.

Gardens don't stop growing, and we won't stop improving PerfectIt. If you're not yet using it, a free download is available. For users who are, you can join in the conversation and request new features in our online forum.

Are you ready for a faster way to edit?