How to Edit in United Nations Style (Hint: Think Globally)

With 193 member states, the United Nations could probably have 193 different style guides. Fortunately, the organization has settled on just one United Nations Editorial Manual. The comprehensive online guide includes style suggestions for everything from acronyms to numbering of maps and figures.

Of course, the United Nations is not a monolith. It comprises dozens of organizations and agencies—from UNICEF to the United Nations Environment Programme to the World Bank Group—and many of them have their own editorial style guides. If your editing assignment comes from one of those bodies, be sure to find out if they have a specific style to follow.

Here are a few other key style points to remember when editing in United Nations style.

Take It Easy on the Acronyms

The United Nations urges writers and editors to keep acronyms to a minimum and to avoid them entirely in formal documents like General Assembly resolutions. And even though the United Nations is so well known that most people refer to it by its acronym, the preference is to never use “UN” (though ONU is an acceptable acronym in French).

Furthermore, if you are using an abbreviation or acronym, UN style dictates that you should never use it in the possessive form. For example, you would refer to the “Commander of UNMIL” or the “UNMIL Commander,” not “UNMIL’s Commander.” This rule also applies to the names of countries: the “policies of China” or “China policies,” not “China’s policies.”

While these rules work well in a lot of cases, it can potentially make for some awkward phrasing, so get ready to put your thinking cap on when you’re handling acronyms like these.

Gender inclusivity is particularly important when communicating with a global audience, and the United Nations Editorial Manual includes an entire section to assist writers and editors as they work to make sure documents do not perpetuate gender stereotypes or discriminate against a particular sex or gender identity. The tips and examples in Guidelines for Gender-Inclusive Language are helpful no matter what you’re editing or for whom.

United Nations style also recommends the use of the singular “they”—at least in informal writing, such as emails. Here’s an example: “Before submitting your document, send it to the agent for review; they will return it to you with comments.” Note that the traditionally plural “they” is being used as a pronoun for the singular term “agent.”

Fans of the serial comma, you’ll have to sit on your hands for this one! United Nations style follows the AP Stylebook in recommending that writers avoid the serial comma unless needed for clarity.

So we’d refer to “Chad, the Niger, Mali and Mauritania” as the largest West African countries, with no comma before “Mauritania.”

Besides the serial comma, the treatment of numbers is the other big style point most editors will want to consider before diving into a United Nations document. Pay close attention to these; some recommendations will look odd to editors whose work is mostly in the United States.

Here are a few of the basics:

The world is a fluid place. To keep track of it, the United Nations maintains the United Nations Multilingual Terminology Database. When you need to double-check a fact related to a country—everything from its formal name to the correct spelling of its currency—you can enter the name of a country in the database search field. For example, if you enter “Mexico,” you’ll see that the formal country name is the “United Mexican States,” and the short form, used for most purposes other than legal texts such as treaties, is “Mexico.”

Keep an Eye on the Time

Checking for all of these issues manually is time consuming. So why not make your work easier by using an automated consistency checker like PerfectIt™ for Microsoft Word?

PerfectIt is a Microsoft Word add-in that checks most of these issues in minutes. Not only is it faster, but it also improves accuracy by reducing the likelihood of human error, especially on long documents. Moreover, PerfectIt comes with a built-in style for checking United Nations style.

To use United Nations Style in PerfectIt, simply select the style from the list of styles in PerfectIt. The software will automatically check for United Nations spelling preferences, inconsistent hyphenation and capitalization, inappropriate language, and much more. PerfectIt is not a replacement for a human editor (all style decisions are left to the user); however, PerfectIt saves so much time in checking United Nations style that it quickly pays for itself. 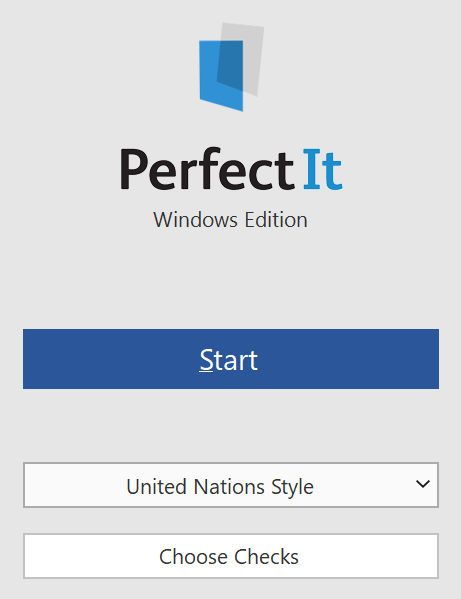 If you’re editing for one of the UN organizations (or other transnational bodies) that have a style based on the United Nations Editorial Manual, then you can use PerfectIt’s built-in style as a starting point. Then you can edit that to suit your own institutional preferences. Instead of starting from scratch, you simply change the points where the styles differ, and voilà! You can then share the customized style guide across your department and around your agency.

If you use the United Nations Editorial Manual, PerfectIt is the secret ingredient you need to get all the style points exactly right. Let PerfectIt take care of these details so that you can focus on your mission: creating documents that are clear, helpful, and easy to read. Click to get a free trial of PerfectIt today.

Check Your Text Faster with PerfectIt