Should You Use Accents in Your Text?

Is it cafe or café?

With each of these examples, you have a choice to make. Should you include these special marks, or leave them out?

These are diacritical marks, or diacritics, and they include accents, cedillas and more. Often, the term ‘accents’ is used colloquially for all of them, and that’s the term we’ll adopt here.

Be aware that they are also sometimes lumped in with ‘foreign characters’ – letters and other characters that are entirely distinct from those that make up written English. One example of a foreign character you may be familiar with is the German Eszett, ‘ß’, used in Straße (it’s the word for ‘street’, and it’s sometimes spelled in English as ‘Strasse’).

Questions about topics such as accents might prompt you to sigh and ask, “As long as my text is comprehensible, does it even matter whether I use them?”

Well, it matters if you want your readers to have a good reading experience. Any part of your writing that strikes your readers as inconsistent distracts them from your words and their meaning. So the reason you should take notice of accents is to make sure your readers don’t have to!

You might have noticed that English changes over time. ‘Electronic mail’ becomes ‘e-mail’ and then ‘email’. Foreign words that were once unfamiliar slip into everyday use (e.g., depot, voila), and in the process lose their accents.

But authorities can disagree over the precise moment when a word becomes sufficiently naturalized to go accent-free. Your job is to decide which authority you’re going to use and apply their guidance carefully.

If you’re a student or academic, you may well be required to follow a style manual such as the Chicago Manual of Style (CMOS) or APA Style (from the American Psychological Association). These provide extensive guidance on using accents for terms absorbed into English from many world languages, and this guidance is evolving all the time, so you have to keep up to speed!

Organizations such as publishing companies, businesses and government bodies often have their own style guides that staff and associates are expected to use. Again, it’s important that these are kept up to date as language evolves, and that you regularly refresh your knowledge of them.

Maybe, though, you don’t follow a comprehensive style guide. If that’s the case, you might rely on a respected dictionary such as the Oxford English Dictionary.

Take a look at Oxford Dictionaries, a free online resource covering contemporary English usage. You will see that it suggests ‘appliqué’, with the accent, but ‘cafe’, unaccented. The distinction is probably because ‘cafe’ is common enough for most people to know that it’s pronounced with two syllables, whereas ‘appliqué’ is less common. However, just in case you’re still attached to writing ‘café’ in the older way, with its accent intact, Oxford Dictionaries allows that usage too – ‘(also café)’ – and even includes it in its example sentences.

What’s more, dictionaries can disagree even on common words like this. If you take a trip across the Atlantic, you will see that Merriam-Webster’s online dictionary gives ‘café’ as its default, but the variant ‘cafe’ is allowed as well. 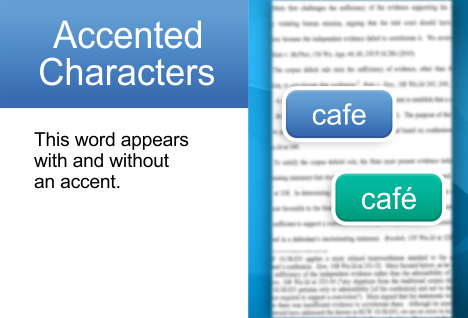 After you’ve decided on the authority you’re going to look to for guidance, the most important thing about using accents is to be consistent.

One way of checking this in your document is to perform manual searches. For example, you can search one by one for common accented characters such as ‘é’ and ‘à’. Then you can search again for the unaccented versions of the relevant words, to check whether there is any unwanted variety.

Word also has some advanced features that can help with checking accents. For example, you can set them to appear in a specific colour to make them easier to spot. However, even with a few savvy tricks up your sleeve, it’s obvious that checking your accents, especially across a long and complex document, can turn into a lengthy and labour-intensive process. There is a better way.

PerfectIt is an add-in for MS Word that automatically checks the consistency of your text, running a range of tests that cover hyphenation, capitalization and more. PerfectIt includes a specific test for accents – it automatically locates all the accented characters in your document, then compares the words they are in to every other word. In seconds, it ensures that accents have been used in the same way each time a relevant term arises in your document.

You can even modify PerfectIt’s style sheet to match your own preferences, or those of the style guide you follow, to make the process easier still.

You have the option to download PerfectIt and try it out for 14 days free of charge to see how it can help you make sure that you present your documents consistently and professionally, down to the last detail. Voila!