How to Find Brackets and Quotes Left Open

Why do small mistakes slip through even when we try so hard to iron them out? Scientists are only beginning to come up with answers. For instance, psychologist Tom Stafford of the University of Sheffield explains that writers make errors because they are busy concentrating on the high-level task of conveying meaning, whereas readers pick up typos because reading requires less brain power.

Editors are in the tricky position of needing to play both roles: writer and reader. They must edit the text to help convey the writer’s intended meaning while at the same time read as if with a fresh eye to pinpoint all the niggly bits and pieces. (Shouldn’t there be a comma there? Who’s speaking now? Why is there a capital letter here when there wasn’t one three pages back?)

Balancing this dual role is no mean feat, and this skill is one of the main differences between asking a friend to ‘proofread’ a manuscript and engaging a professional, trained editor. But training and experience can only take editors so far, and editors are only human. The risk of missing an error never goes away.

Working on the words is one (important) thing, but editors also need to focus on punctuation. It is widely acknowledged that people read by scanning the shape of a word, or even of a sentence, and their brain fills in the gaps. You’ll know ths fi y’ve evr trid rdng sily abreviatd sentncs. Proofreaders and editors are trained to slow their reading and to look more carefully at each word and the punctuation around it, but even so, shapes can deceive.

Paired punctuation marks are especially difficult to spot in complex sentences and in long stretches of dialogue. Conventional spelling checkers may not notice the problem. (Where the brain readily acknowledges the opening of a bracket or quotation mark, the paired closing mark may be missed, especially if the final letter to which the mark should be attached is of a similar shape to the missing symbol.

See what I did there? Let’s consider this problem in a little more detail.

The easy thing about dealing with brackets is that there is a straightforward ‘golden’ rule: every bracket should be closed! But that’s the only easy thing…

The symbols ( ), [ ], and { } are all “brackets”, but they have different functions and meanings, depending on the context of the material. In UK usage, round brackets ( ) are also known as parentheses. In US usage, brackets are [ ] (known as square brackets in the UK). Then there are the curly brackets { }, more correctly termed “braces” (not to be confused with the things that hold up trousers or straighten teeth), and angle brackets < > sometimes used around web addresses and material on codes and programming.

This can be tricky when there are nested brackets, especially in UK usage, where – in conventional text – we can nest several sets of paired parentheses within a single sentence. (US style generally swaps to square brackets when nesting within parentheses.)

If you thought brackets were tricky, missing quotation marks take trickiness to a whole other level. There is the problem of single or double; the potential clash of single quote marks and apostrophes and quotes within quotes; and the convention of opening quotes but not closing them if speech continues across paragraphs (and pages). This means that the convenient golden rule of brackets cannot be applied so readily to quotation marks. It’s true that an opening quote must, eventually, be closed, but the marks may not be in pairs – especially if the house style is to use single quote marks and the text is stippled with apostrophes.

And then there is the issue that a lay reader or inexperienced writer may gloss over entirely: the difference between curly quote marks and straight. Yes, there really is a difference: it’s not just about what looks nice!

The difference between straight and curly quote marks has become more of an issue since the rise of online publishing because, whereas texts created in Word will generally default to curly marks “ ” and ‘ ’, texts generated online tend to default to straight quotation marks ' (prime) and " (double prime). Canny web editors know that they can use an html code to insert the preferred curly versions, but many don’t bother. (Editors have learned that a sudden swap, mid text, from curly to straight quote marks can indicate potential plagiarism.)

Curly quotation marks (also known as speech marks or ‘inverted commas’) have three main uses: to indicate a person is speaking; to indicate a quoted extract from another work; or to draw attention to a word used out of its usual context (a ‘scare quote’). Straight quote marks might (erroneously) be used to indicate all of these things, but they have other specific purposes: to indicate feet and inches (I’m 5′ 1″) and other units such as angular measurement, 2° 4′ 29″ (degrees, arcminutes and arcseconds); and to indicate first or second derivatives in physics and mathematics (f′(x) and f″(x)) and in Cartesian coordinates. There are also specific uses of these symbols in linguistics, music and history.

A Better Way to Check

It is easy to see that a simple Word search for ( or [ will not necessarily help an editor to check for absent ) and ] symbols. That’s even more true for quotation marks where complexity makes the task more challenging.

A better way is to use PerfectIt to check these marks for you. It carries out the check for brackets and quotes left open at the same time as it’s checking for dozens of other inconsistencies and inaccuracies. 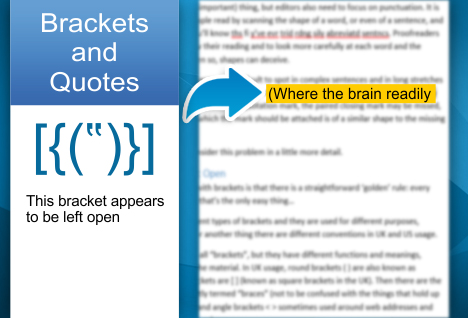 The scan takes just seconds, and it makes it easy for you to inspect locations and make corrections. You still need to check manually (PerfectIt focuses on brackets and quotes left open but doesn’t yet, at time of writing, check for a missing opening pair). However, it makes the check easier. And when you’re editing, having one less problem to focus on means you can focus more on the high level tasks of editing. Click to download the free trial!

Melanie Thompson is a freelance provider of editorial services, training and content, based in the UK. Her website is www.melaniethompson.co.uk.